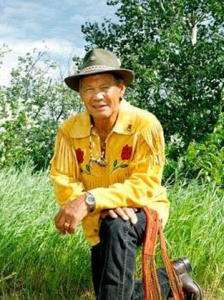 Bruce grew up in central Alberta in a small rural town. He completed his Red Seal Apprenticeship in Electronics at the Northern Alberta Institute of Technology in Edmonton. He has years of experience working in the trade industry, including a position with Worksafe BC and has worked over 20 years in the forestry industry. Bruce was President of the Metis Nation of British Columbia for 12 years before retiring in 2016. After retiring from the trade industry, Bruce joined the Cedars team to work with the Indigenous Program.

Bruce’s father was Cree and French and his is mother Cree and Scot. Both parents were fluent in the Cree language. As his parents first language is Cree, Bruce is currently striving to become fluent in the Cree language. Growing up, he lived the Metis life as his father hunted and trapped when he wasn’t  working to keep the family fed. He comes from a family of ten and is the fifth oldest of five boys and five girls. Bruce is extremely active in the Metis community and has competed in spiritual dances at Metis festivals. In his spare time, Bruce enjoys woodworking, renovating his home, and spending time with his wife, their 7 children and 12 grandchildren.